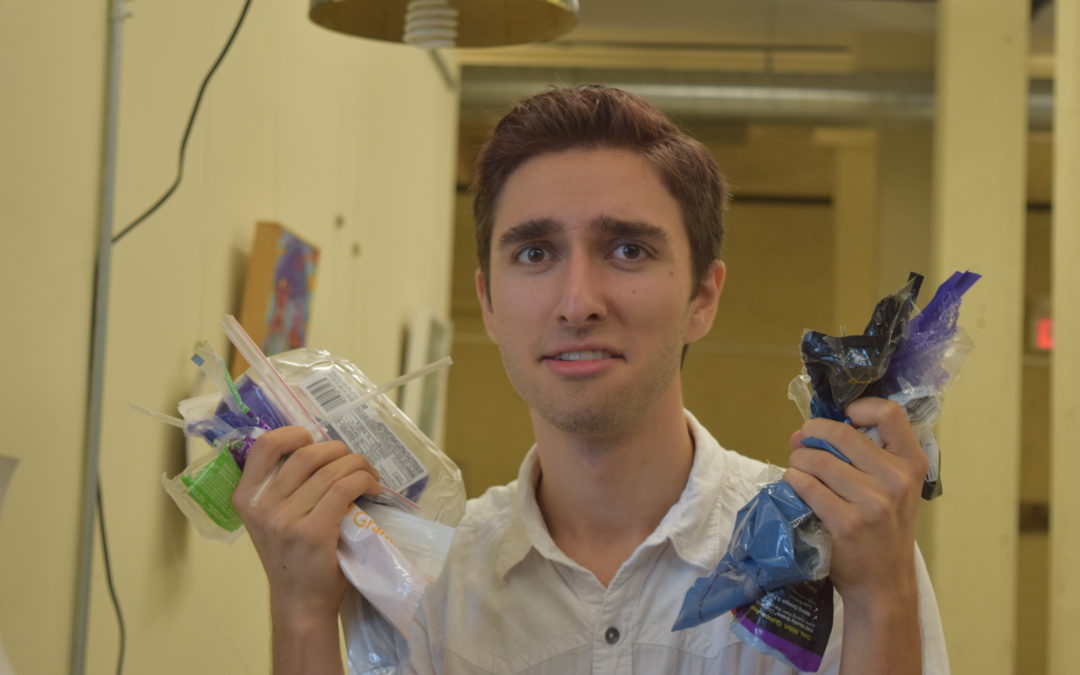 I looked down at the box of trash in my hand. After an entire month of trying to generate no landfill waste, it was a testament to my efforts, and a reminder of just how difficult it is to try to live a Zero Waste lifestyle.

At the beginning of July, I made a commitment to generate as little trash as possible. I knew that living Zero Waste for a month can be near impossible for most people without major lifestyle changes. So I decided that it would be an interesting experiment to see how much I could reduce my waste going to landfill while living within my 21-year-old-working-away-from-home-for-the-summer lifestyle. Over the past 10 weeks, specifically for the month of July, I found out just how viable it can be for a broad swath of people to go Zero Waste.

In attempting to live Zero Waste, I was forced to make many compromises, the biggest being my decision to go mostly vegetarian. For an avid meat-eater, this was easier said than done. Since I’m not particularly good at cooking, I decided early on the I would need some pre-made food, and that required purchasing items wrapped in non-recyclable packaging. So I decided that when I could not avoid buying non-recyclable packaging, I would at least make sure that what was inside was vegetarian. By avoiding eating meat, I was avoiding all of the waste that comes with processing and packaging meat. In this way, I compromised my carnivorous diet in favor of a semi-vegetarian one. By the end of the month, about a fourth of my waste was tofu wrappers.

Embarking on this endeavor came with other sacrifices – little ones, like giving up on eating pre-wrapped candies, chips, fortune cookies, and juices with foil / paper seals, as well as larger ones, like taking the extra time to cook dinner instead of buying the incredibly wasteful, but superbly convenient frozen meals. For someone so accustomed to packaged and convenient foods, it was a difficult transition to make.

Something that became apparent as the month went on is that the foods with the most packaging are generally the ones that contain the least nutrition, like frozen pizza and potato chips. A large portion of the food that I bought ended up being produce that did not have any wrappings. As the packaged junk food in my shopping cart decreased, the apples, leafy greens, carrots, and corn took their place. Unexpectedly, I found myself enjoying this — suddenly, I was much more aware of exactly what foods were entering my body, instead of simply consuming a mix of artificial flavors and ingredients near impossible to pronounce. In simply attempting to generate  less waste, I became a far healthier eater and more conscious shopper.

Munching on what I had previously considered “rabbit food” would have quickly become boring, if I didn’t have reliable friends with whom I could cook dinner once or twice a week. I recognize that this was a privilege that made eating Zero Waste meals much easier; having friends to collaborate with saved me many hours in the kitchen that otherwise would have been prohibitive to my Zero Waste goals.

Throughout this challenge I collected all the trash I generated and stored it in my room. By leaving it perfectly visible and not tossing it “away” into a bin, I was forced to stare at the waste I had created every single day. Not only was this tactic eye opening, but it was also an encouraging way for me to gauge how well I was succeeding in the challenge and areas in which I could improve. Collecting the waste you generate over an extended period of time is a simple step towards reducing it, raising your awareness to start changing habits. 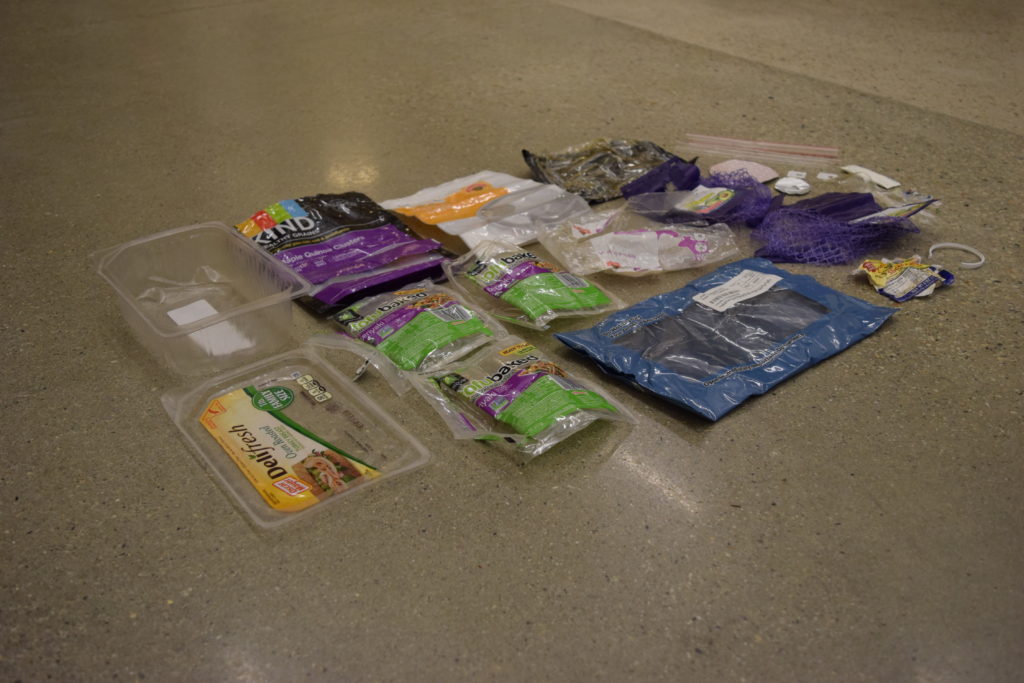 Deciding to live Zero Waste for a month also really helped me understand different aspects of the recycling industry. For example, I learned that the capacity  to recycle different materials varies drastically across the nation depending on the infrastructure in place where one lives. That being said, local infrastructure for managing waste can severely limit who is able to pursue a Zero Waste lifestyle. I was fortunate to have an office very dedicated to composting and recycling all manner of materials; for some communities across the country, curbside recycling pickups don’t even exist! It is crazy that this is still the reality.

This challenge highlighted another troubling reality: the fact that so much of the waste that is generated in our society is done so behind the scenes, and we never realize it. Take restaurants, for example. I can ask for no straws in my drink,  only use cloth napkins, and take all of my leftovers home in my own reusable container to assure that I don’t personally send anything to the landfill. But how much waste was generated in the kitchen to create my meal? I may never know. And this is only one example of just how embedded the convenience of disposability is in our country.

In choosing to embark on this Zero Waste Challenge, our team ended up delving into some deeper philosophical conversations. How does societal privilege affect the accessibility of a Zero Waste lifestyle? How does the institutional definition of Zero Waste create loopholes that allow for “greenwashing” by big industry? Why do the vast majority of corporations actively oppose Zero Waste solutions? In what ways is the individual responsible for reducing waste in spite of greater systemic barriers? These and many other conversations resulted in the creation of the Zero Waste Manifesto, a document created together by staff and interns, that will be a public resource on PLAN’s website. Through this Manifesto, we publicly take a stand on what Zero Waste actually is, the systemic barriers and individual challenges to achieving Zero Waste, and how we can push against and past these barriers.

In 2013, people in the United States generated 167 million tons of trash. The fact that I was able to reduce my trash does not make much headway in solving our waste crisis. So, in the grand scheme of things, what do my individual actions matter? According to the same study, the average citizen generates about 2.89 pounds of landfill waste a day. Multiply that number by the number of days in July, and I found out that the average American throws out 90 pounds of trash every July (89.59 lbs).

I threw out less than one.

It is empowering to realize just how much can be accomplished by making small changes in our daily lives. After collecting my waste for a month, I realize that there are many small ways that I can reduce my waste. If it is available, I can buy more produce instead of processed food, and do my best to make sure that the processed foods I do buy are in recyclable packaging. I can also get reusable bags that are collapsible enough for me to stick in my pocket and carry everywhere for the odd pit stop to the grocery store. 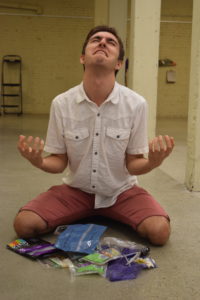 The fact that I still generated trash after an entire month of concerted effort trying not to do so exemplifies that there are systemic barriers to this endeavor. It is immensely frustrating to realize that our society is built almost completely  on a single stream of waste.

On the other hand, it is humbling to know that in trying to live more sustainability, I cannot do it alone. That is what PLAN is all about; creating a post-landfill network: a community of people who are passionate about changing the way our society addresses discarded materials so that waste is really just a resource in the wrong place.