Microplastic Pollution: Another Emerging Threat With Ominous Parallels to DDT 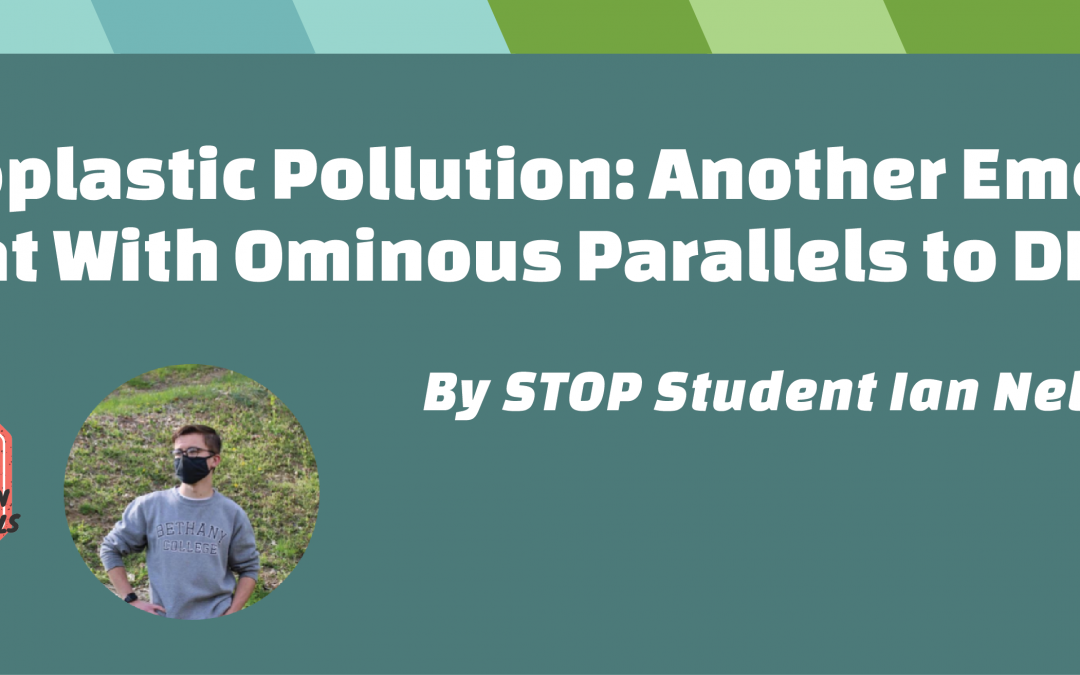 My name is Ian Nelson, and I am a junior chemistry major at Bethany College.  I love the sciences; from a young age I have always asked the “why” questions about the natural world and found the answers fascinating.  I grew up in an old coal mining town in Southwestern PA, and so a lot of my questions were concerned about the environment such as “why does the creek have a weird red color to it?” only to find out it is acid-mine drainage.  This sparked my interest because it seemed such an injustice for nature that these occurrences such as acid-mine drainage happened, and I wanted to help right those wrongs.  I have since found my passion for chemistry and the sciences in general lies in research, and it is through this research that I would like to help support more sustainable innovations for a liveable planet.  One of my primary areas of interest is in sustainable materials, and specifically, sustainable polymers.  Polymers are simply one or a couple molecules (called monomers) bonded to each other, potentially millions of times over, and occur both naturally and synthetically.  Perhaps the polymers that we are most familiar with are plastics.

Plastics are a ubiquitous part of our daily lives.  They are in food packaging, cosmetics, clothing, containers, and construction, to name just a few of their uses.  Unfortunately, plastics are also a major source of pollution.  They are often thrown away and end up in landfills, where they may sit for hundreds of years, as they do not decompose.  Instead, plastics usually break down into smaller and smaller pieces, through various environmental factors like weathering and sun exposure.  These pieces, called microplastics, are another major issue to tackle within the plastic pollution cycle.

Microplastics are particles that are quite small in size (less than 5 millimeters) and are often formed when larger pieces of plastic are weathered and broken down. Because of their small size, microplastics can infiltrate the soil and waterways, as well as organisms who unknowingly ingest them.  Humans are no exception to this ingestion; each day, researchers publish more findings about the presence of microplastics in humans.

From the science, we know now that microplastics cross the blood-brain barrier in fish, thus there is concern about contamination of our brains.  We know they are in our blood.  And we know they cross the placenta and infect children before they are even born.  The chemicals in these plastics – called plasticizers – may leach out of products and bioaccumulate, or build up in organisms.  In many ways, microplastics permeate the ecosystems in a way no man-made substance has in decades.  In fact, it could very easily be the next topic of a modern day Silent Spring.  This classic work, written in 1962 by the famous marine biologist and conservationist Rachel Carson, raised concerns about the adverse effects of the indiscriminate use of pesticides, namely DDT, on human and environmental health.  In it, Carson discusses how these chemicals persist in nature for an extended period of time, get into the waterways and soil, and cause a whole host of negative effects for organisms that were not the target of the pesticides.  As I have mentioned previously, the similarities are uncanny.  Plastics do not decompose and so remain in the environment, they infiltrate waterways and soil, and have been confirmed to infect many organisms from bacteria all the way to humans.

It was Silent Spring that helped push for the founding of the US EPA and raise concerns among the general public about how humans are impacting the environment.  But it was only after Carson was able to eloquently explain the effects of DDT and its other “elixirs of death,” as she called them, to the American public that change was made.  Finally these chemicals were banned, but only after countless people suffered the adverse health effects of the toxins, and after ecosystems were irreparably damaged by chemicals that still persist in the environment to this day, 50+ years later.

The main barrier to banning these pesticides was the corporations that made money off of them– plastics are no different; in fact because many plastics and pesticides come from fossil fuels,  many times these are the same industries under different names. These corporations now rely on plastics as their main source of revenue in an otherwise dying economic sector; plastics are metaphorically (and with microplastics, literally) shoved down consumer’s throats.  The profit is so high for these companies, and the overhead is so low, to package and ship goods in plastic.  Furthermore, when people attempt to take action to stem the flow of plastics, the industry lobbies against legislation and largely turns it on consumer choice.  “It is not our fault consumers do not recycle.  It is purely on the customer and we are simply fulfilling a supply to a demand” the companies say, as the companies spread misinformation over the effectiveness of recycling (such as the Coca-Cola Company recently using Bill Nye in a video) .  Why?  Because recycling is not nearly as profitable as raw production.

Plastics are an incredibly important and useful category of materials, it is what interests me about them.  By changing just one atom in the monomer, you can get a very different polymer with a whole host of new applications.  Our current plastic-dependent lifestyle, however, is based on cheap, meaningless, single-use plastics that serve only to exacerbate environmental issues as companies get rich.  It is not good for our health or that of the environment, and it is clear that a solution must come sooner rather than later.  As I myself hope to study one day, scientists are currently working on making polymers that decompose in the environment, are sourced from renewable sources rather than fossil fuels, and can be more effectively recycled.  Even so, such a perfect solution is little more than wishful thinking as a sole fix when we are already drowning in plastics.  It is thus apparent that we must cut down on our overuse of plastics and push back on the throwaway culture that the current fossil-fuel driven industry is peddling.  Let us as consumers not perpetuate and encourage increasing plastic production, and instead focus on buying locally and sustainably, in reusable or compostable containers.  Furthermore, let us push against the lobbying of the industry, and call and write to our representatives, such that we may push for a ban on unnecessary plastic products like grocery bags and packaging.  It is in these small ways that a combined effort can begin to make a huge push for change.  It may feel like an uphill battle for meaningful change, I realize.  DDT was one of the most prevalent pesticides and was heralded as an ultimate weapon, I mean it even led to a Nobel Prize for crying out loud, but now simply saying DDT evokes only negative responses and disgust for its horrible effects.  All it took for this shift in perception was a dedicated and concerned public outcry for the environment.  So let us embrace this same passion now for an equal, if not greater, threat.