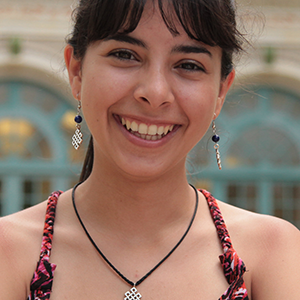 Host a Tour Stop at your School!

Are you interested in having Amira Odeh-Quiñones speak at your school for a Points of Intervention Tour Stop? Fill out the interest form today, and a PLAN staff member will be in touch!

Amira’s work in a campaign titled “No Más Botellas” at the University of Puerto Rico was successful in making one of their campuses the first Latin American University to ban the sale of bottled water. She has represented her country at the UN Climate talks and been a part of the Sierra Student Coalition training program, facilitating leadership workshops to youth in Puerto Rico and the United States.

I constantly asked why are we so willing to buy disposable plastic bottles? We were at a point of consumption that didn’t let people even think that they can open a tap and drink water from it.