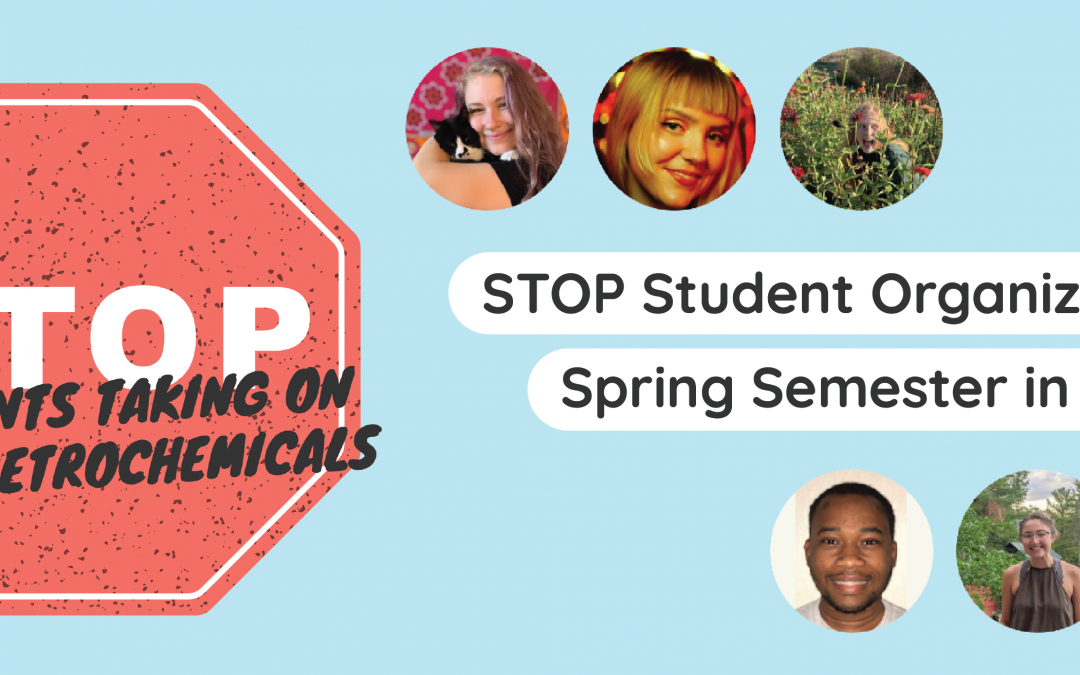 For the last seven months, PLAN has been mentoring 6 students in the Ohio River Valley to support them in campaigns to eliminate plastic through our STOP: Students Taking On Petrochemicals & Plastic program. This work focused on the production stage of the Linear Consumption Economy. Over this time, the students have learned how to build coalitions, write press releases, facilitate large meetings, host events, and more. Not only are there young & experienced organizers in this region ready to resist the petrochemical build-out, but there are sparks of a larger uprising of youth that want to protect Appalachia from this toxic industry. In June of this year, they hosted the first Youth for Appalachian Climate Justice Conference, which brought over 50 youth organizers from this region together to train, collaborate and learn from each other. Read more under each school’s heading below to see what our students have accomplished at their respective campuses.

Over the last 7 months, Selena has seen tremendous growth as a community organizer. She was able to secure funding for much needed updated recycling bins at her school, and also hosted the first ever Washington & Jefferson Sustainability Summit which focused on the fossil fuel extraction in the region and its relationship to both single-use plastic and the school’s sustainability efforts. As an individual, she was also awarded the W&J Environmental Studies Program Prize ‘21. She looks forward to continuing this work as she starts a graduate program at Penn State University.

The Marshall University campaign kicked off with a brand audit in early fall last year. This audit made local news, catching the eye of the university president. In response to this, Marshall President Jerome Gilbert signed onto the Break Free From Plastic Pledge, making Marshall the first campus in Appalachia to commit to eliminate all single-use plastic by 2026. More about Baleigh’s role in this extremely successful campaign is noted in this blog post. This school has also partnered with local community groups to start an industrial composting facility, which will be able to receive waste from the school and surrounding areas.  Throughout all of Marshall’s projects, they have maintained a close partnership with The Ohio River Environmental Coalition (OVER), with both Baleigh and the Marshall Sustainability Director sitting on the OVEC board.

Rachael spent the fall semester assembling diverse stakeholders for a Plastic Free Task Force that meets biweekly. This group is composed of students, staff and faculty from across the university. In the community, Rachael has worked in various capacities with community groups such as Morgantown Green Team, Concerned Ohio River Residents, & the Ohio Environmental Council. At the college, Rachael has been working closely with the Student Sierra Club at WVU, and introduced a petition with this club to eliminate plastics. The petition has over 500 student signatures, with many coming after hosting a successful panel event showcasing their fellow STOP organizers, and the coalition that they are building together. Rachael is currently working on passing an official  resolution through the Student Government that supports their petition to eliminate plastic on the campus, in addition to pursuing her masters at West Virginia University.

Tatum started the fall off with the creation of a brand new club: Greener Bethany. The process to get recognized was difficult, but they were officially recognized this spring. Despite being deemed “unofficial,” the club continued to meet on a regular basis in the fall. Greener Bethany started a petition to ban styrofoam, which now has over 200 student signatures, and had several meetings with university administrators to bring this idea to fruition.  This spring they celebrated a huge win when they applied for and received a $15,000 grant from the Weeden Foundation to implement a reusable container program for all students (read more on the process in this blog post). Bethany College will now be the first in WV to switch completely to reusable containers. The club also has stayed connected to the community by regularly attending the Bethany Community Environmental Club meetings.

Briant’s work has focused on connecting students to the surrounding environmental justice groups, such as Change Today, Change Tomorrow and The West Jefferson County Community Task Force. On campus, he has assisted The University of Louisville in completing PLAN’s holistic zero waste assessment, Atlas, for their full campus. After having several meetings over many months with dining services and vendors, Briant celebrated a big win this spring, when University of Louisville became one of the first schools to successfully switch from bottled water to canned water. He has also been adding student-focused input on the sustainability and climate action plan.